Would Someone Please get these Fucking Skinny Jeans Out of my Face Already? 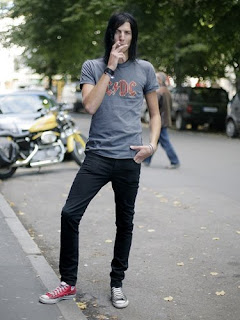 This fashion trend has been mildly annoying for some time now, but I reached my breaking point this past Sunday at Whole Foods. I was minding my own business in the check-out line when I noticed two lines over a fat fuck hipster of EPIC proportions in a pair of skin tight black skinny jeans. His feet had to be purple given how tight these fucking things were at the ankle. I’m not even going to attempt to describe this asshole in full. If I did the World Wide Web might explode. At minimum I’d have a seizure. Suffice it to say just the sight of this fucktard was enough to ruin even the sunniest of days. Whoever came up with the idea to sell skinny jeans to fat people should be sacked immediately, with much aggression. The highest waist size these things should be sold in for men is 28. If you are bigger than that, fuck off and wear some goddamn pants. Ultimately no one could legally buy these abominations unless they were in a band or could prove Swedish citizenship, if I had my way.
This virus initially started, as do all malignant fashion diseases, in Europe and spread to New York, America’s most densely populated assclown hipster den. It should have died there but the virus went airborne and escaped the island to take root in the mainland. As I have a natural immunity to this pandemic I ignored the problem as people were suffering all around me. After my harrowing experience with the Hippo Hipster at Whole Foods I can no longer sit idly by as grotesque people over the age of 25 with stick-out-guts butter their hips so they can stretch these prepubescent trousers over their ample flesh. I haven’t the foggiest idea how they get into or out of these pants. My best guess is that they have to jump into them from several stories above to apply the pants, while calling for the Jaws of Life to remove them at night.
My “Surf’s Up!” SoCal buddy has informed this contagion has infested the greater Los Angeles area as well. I thought everyone in L.A. wanted loose-fitting, comfortable clothing that didn’t impede their ability to be far-out? I guess I was wrong. And when I say “L.A.” I am obviously not including the greater Hollywood area, which doesn’t count as part of Earth.
I think these jeans are very practical if you are between the ages of 16-24, in a modern punk band, less than 140lbs, are addicted to herion, and have tiny feet. Everyone not in that demographic, please do the right thing and quit wearing them.
Tweet

Male homo sapien. Warrior poet. I live in Chicago with one wife, one offspring, and Scout the dog. I enjoy various stuff. Besides skinny skiing and going to bullfights on acid, I also enjoy running, reading, drinking, eating and procrastinating on many things, such as starting this blog. I have a mom, a dad, and a younger brother who recently produced a sister-in-law. I'm the only person in my family, sister-in-law included, who doesn't have a post-graduate degree. I guess that makes me special. I grew up in a small to medium sized town in the middle of Ohio. In fact the even smaller town next door has a sign which reads "The Geographic Center of Ohio". Given this is what they choose to boast you can only imagine how exciting that town is. My town is infinitely cooler. For example on weekend nights people from my town and the surrounding villages and hamlets converge on the public square to "cruise" in their souped-up mini trucks, some bearing Confederate flags, despite growing up and living rather safely north of the Mason-Dixon line. This is high-minded stuff we're talking about here. I graduated sometime during the Clinton presidency from the local high school where I played football and participated in absolutely nothing else. This strategy paid huge dividends when I applied to numerous colleges on the eastern seaboard which were highly selective. When you show up to the admissions table with "HIgh School Football and Nothing Else" on your application, you get respect. After graduating from Ohio University with a degree in Economics that I've used for absolutely nothing, I moved to Boston. Boston is a lovely city. I was doing things I'm not proud of for beer money and I left after 16 months. My next move was to Chicago and 10+ years later there I still reside. I write this blog for therapeutic reasons. Much like some people paint to relax or smoke crack to unwind after a stressful day, I record my thoughts on Al Gore's World Wide Web for 9 friends, 4 family members, 1 person who accidentally clicked through after an unsuccessful Google search for something else, and a guy named Patriot1 who lives in a silver Air Stream in the Nevada desert and broadcasts his own radio show. Is there a point to all of this? I doubt it. Years ago and in a galaxy far, far away (College Park, Maryland, then Athens, Ohio) I was toying with the idea of being a journalism major. I enjoyed writing so it seemed the obvious fit. Then I attended career day and learned that journalism majors could look forward to a salary of $EA,TSH.IT per year with the promise of a fatal heart attack at 47 years of age. I'm not falling for that trick, I told them (them being no one, and told being saying it in my own mind in the shower). Approximately 15 years later here I sit declared the big winner in that battle: I never made any money doing anything else and now I'm writing entirely for free. So suck balls, journalism career day. The views expressed in this website are mine and mine entirely. I don't wish to be an even bigger black eye to my family than I probably already am. As a result of this I will never be able to run for public office and I accept that reality. But this website is a very dignified, well-dressed skeleton full of witty retorts and honorable deeds compared to the disheveled, stenching, staggering and loud skeletons who would come marching out of the closet to White Zombie's "Thunderkiss '65" if they ever unearthed the college years. So enjoy your train ride, your hangover day at work, your AA meeting or your dump. I'm here to serve.
View all posts by Zach →
This entry was posted in Uncategorized and tagged fashion, hipsters. Bookmark the permalink.

One Response to Would Someone Please get these Fucking Skinny Jeans Out of my Face Already?