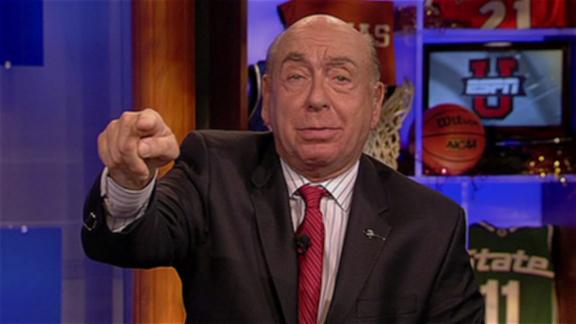 The NCAA Tournament is fun.  The upsets, the fantastic finishes.  One-and-done at its best.  In my opinion it does no better job of pairing the two appropriate teams for the national title game than does the BCS system in college football.  I actually think it does a worse job.  But that isn’t the point, nor does it mean I think it is any less exciting because of that fact.  What is the point today is that the lead-up to the actual tip-off of the first game of the NCAA Tournament is one of my very least favorite times of year.  It is when every hyper college hoops fan with way too much time on their hands starts screaming to anyone who will listen that a 19-11 Virginia Tech team that was left out of the field is getting totally fucked in the ass with a sandpaper reach-around, while a 21-13 Washington State team doesn’t deserve to be there.  It is by far one of the most frivolous, pointless, meaningless and utter wastes of fucking time that exists in the world.  Who gives a flying fuck?  Unless you are in charge of the yearly sports budget for the university who didn’t make it, then why do you care?  Neither the team left out, nor the team who took their place, has a snowball’s chance in hell of winning the whole thing.  Instead of crybabying around like a bunch of pussies, the “left outs” should just look in the mirror and say, “You know what Larry, we shoulda won another game or two and we wouldn’t be in this predicament”.  “Yep Chuck, you nailed it.  If we hadn’t stayed out late getting lap dances from Belorussian whores back in December and lost the next day to Shitbag Tech at the Holiday Tournament, we are in the field of 68.  Lesson learned.”.  But no, asshats are going to be shouting through the idiot box at hot heads watching from their living rooms about how the committee needs to be audited because Georgia Tech’s win over Drexel back in December should be weighted more heavily than Alabama’s win over UNLV in November.  The time would be better spent masturbating to grainy 1970′s big bush porn.  At least something happens at the end.  Nobody “on the bubble”, whether in or out, could ever win anyway.  Go argue the existence of dinosaurs with the Creationist wingnut who hangs out on the corner next to 7-11.  You’ll get more satisfaction.

Male homo sapien. Warrior poet. I live in Chicago with one wife, one offspring, and Scout the dog. I enjoy various stuff. Besides skinny skiing and going to bullfights on acid, I also enjoy running, reading, drinking, eating and procrastinating on many things, such as starting this blog. I have a mom, a dad, and a younger brother who recently produced a sister-in-law. I'm the only person in my family, sister-in-law included, who doesn't have a post-graduate degree. I guess that makes me special. I grew up in a small to medium sized town in the middle of Ohio. In fact the even smaller town next door has a sign which reads "The Geographic Center of Ohio". Given this is what they choose to boast you can only imagine how exciting that town is. My town is infinitely cooler. For example on weekend nights people from my town and the surrounding villages and hamlets converge on the public square to "cruise" in their souped-up mini trucks, some bearing Confederate flags, despite growing up and living rather safely north of the Mason-Dixon line. This is high-minded stuff we're talking about here. I graduated sometime during the Clinton presidency from the local high school where I played football and participated in absolutely nothing else. This strategy paid huge dividends when I applied to numerous colleges on the eastern seaboard which were highly selective. When you show up to the admissions table with "HIgh School Football and Nothing Else" on your application, you get respect. After graduating from Ohio University with a degree in Economics that I've used for absolutely nothing, I moved to Boston. Boston is a lovely city. I was doing things I'm not proud of for beer money and I left after 16 months. My next move was to Chicago and 10+ years later there I still reside. I write this blog for therapeutic reasons. Much like some people paint to relax or smoke crack to unwind after a stressful day, I record my thoughts on Al Gore's World Wide Web for 9 friends, 4 family members, 1 person who accidentally clicked through after an unsuccessful Google search for something else, and a guy named Patriot1 who lives in a silver Air Stream in the Nevada desert and broadcasts his own radio show. Is there a point to all of this? I doubt it. Years ago and in a galaxy far, far away (College Park, Maryland, then Athens, Ohio) I was toying with the idea of being a journalism major. I enjoyed writing so it seemed the obvious fit. Then I attended career day and learned that journalism majors could look forward to a salary of $EA,TSH.IT per year with the promise of a fatal heart attack at 47 years of age. I'm not falling for that trick, I told them (them being no one, and told being saying it in my own mind in the shower). Approximately 15 years later here I sit declared the big winner in that battle: I never made any money doing anything else and now I'm writing entirely for free. So suck balls, journalism career day. The views expressed in this website are mine and mine entirely. I don't wish to be an even bigger black eye to my family than I probably already am. As a result of this I will never be able to run for public office and I accept that reality. But this website is a very dignified, well-dressed skeleton full of witty retorts and honorable deeds compared to the disheveled, stenching, staggering and loud skeletons who would come marching out of the closet to White Zombie's "Thunderkiss '65" if they ever unearthed the college years. So enjoy your train ride, your hangover day at work, your AA meeting or your dump. I'm here to serve.
View all posts by Zach →
This entry was posted in Uncategorized and tagged basketball, college, nerds. Bookmark the permalink.