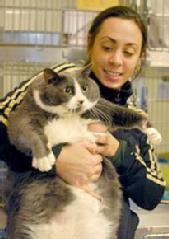 This morning I’m at the gym, dominating per usual.  Finishing out on the Stair Climber, when I see a BOMBSHELL of a news story blow up on the screen, via Rob Elgas.  Apparently in Oregon there is a massively obese cat which has been taken in by the Humane Society.  He needs a fucking new workout partner!!!  This pussy needs to lose some weight, stat.  The cat needs help.  Why this story wasn’t the lead for today’s morning news is beyond me.  We’ve got a morbidly obese cat trying to pave the way for CBS’s newest hit, “Biggest Loser: Feline Edition”, and you are burying this golden shit behind some Nancy-pants shooting on the west side and 9 car crash on the Eden’s Expressway.  I wish someone would make me CEO of NBC5 News right now.  I’d call everyone in the main conference room, from the CIO right down to Holga the night janitor, and tell them they have 30 minutes to pack their fucking shit before I release the hounds.  “Oh, just a story about a goddamned sumo cat right here in our own country, not some place where freaky shit happens every 30 seconds like India and China.  Let’s put in on minute 57 of a 60 minute telecast, sound good?”  “Sure Larry, works for us.  We don’t even have to work it in at all if you think people won’t be interested in a story about an obese cat who has made up his mind to get fit before it is too late?”  Did I mention…..no, I’m quite certain I’ve not yet mentioned….that the cat’s name is Walter???  Fuckin’-A right man, dude’s name is Walter for Christ’s sake.  Not some lame ass name like Mittens or Pawsy or Patches or anything.  Completely awesome name: Walter.  Who the fuck is in charge of putting together a show over there, the heroine addict who hangs out next to the dumpsters in the alley behind the studio?

And this isn’t even close to the worst part of this abomination of a telecast.  Are you fucking ready for this shit…….Rob Elgas explains the story, in full, and then with a totally straight handsome face looks into the camera and says, “We don’t actually have a picture of Walter.”  What.  The.  Fuck.  Are.  You.  Talking.  About.  Ass.  Hole!  You don’t have the picture of the most obese cat on the planet who is trying to Jared his way into stardom?  SWEET FUCKING STORY BRO!!!!!!!!!!!!!!!!!  Seriously, everyone there is sacked, with prejudice.  What is the point of even bringing this up without the picture?  Actually, don’t waste both our time trying to think of an answer, because there is no fucking point.  Look above.  I found the picture.  It took me 7 seconds.  My resources were a shitty (and I mean shitty) PC and Google.  Rob, you goin’ into battle with this type of support team?  You’re rollin’ in there naked pal.  If these fuckers can’t even get you a photo of Walter, then let me explain how you can do it:  Go over to your computer, the one you use to email pictures of your boner to summer interns.  Double click on the blue, lower case ”e” with a gold ring around it.  In the white box at the top which probably has the NBC5 News address, erase it and type in http://www.google.com/.  Then click on the “Images” link.  Now in the search box type in “obese cat oregon” and depress your Enter key.  The first one is Walter.  Hold your cursor over the picture, and double-click your mouse.  With Walter on your screen, go to the top and click the icon that looks like a printer.  Then in the pop-up, click “OK”.  Now walk to the printer.  No, not the one you made Emma the intern copy her beaver on by telling her she had to in order to “get anywhere in this business”.  That is the copy machine.  Look around, it will be making noise and an image of Walter will be sliding out of it.  Take the picture, put it on your anchor desk.  When you talk about Walter, hold it up next to your face.  You have to turn it around so the image is facing the camera.  Good job, now we can see what the fuck you are talking about.  I get it, you are handsome.  You are the money on the show, not the fucking immigrant laborer.  But this time you should have taken the bull by the balls and done a little ground work yourself.  No Pulitzer for you, bandejo.

You can’t make an impact with a fat story unless you can back it up with photo documentation.  Here is how you handle your business properly:

1999.  My roommate goes to Hilton Head for spring break.  When he returns, he has a story, as do others on the trip, regarding this epic whale he harpooned.  To protect him, I won’t use his real name.  It rhymes with Will Pagoda, so we’ll call him that.  Will Pagoda was no Captain Ahab chasing down whales obsessively–this one was purely for sport.  Everyone told me, ”You can’t believe how huge this walrus was that Pagoda banged!”.  You are right, I can’t believe it, because all I have are reminiscences from drunk dudes already a week old.  One crafty fellow says, “Just wait”, all cryptic-like.  Well he delivered.  For all the young readers out there, around the turn of the millennium, you took pictures, then went to a business such as Walgreen’s and had people “develop” them.  I know, this is some old-timey shit we’re about here.  So this fine fellow presents the photos, and we have our Zapruder: Another colleague of ours slipped into the crime scene early the next morning, while both the hunter and Shamoo were still snoring.  He took a photo holding her jeans.  Well, they were jeans in the purely academic sense.  There were two legs, a button closure, a zipper, made of denim, of a blueish hue, etc.  However, they looked more like the curtain on Broadway.  And this savvy young lad had the wherewithal to not only hold them up, but he put them on.  One leg, that is.  As in he is holding up the jeans and standing in them; his entire lower body in just one of the legs.  You read that right, ONE FUCKING LEG.  There are many who can confirm this story and I do pray the photo still exists for posterity’s sake.  We wouldn’t want this lost to history or stolen by Nazis.  I am not talking about some elf or spright either.  The guy standing in the jeans is probably 5’10″ or 5’11″, with a stout, athletic build.  Yet he could fit entirely in one appendage of this basking shark’s cellulite retainer.  Now I ask you this, Rob Elgas.  If a group of some of the drunkest frat guys in the state of Ohio (and if you know many people from Ohio, you realize that this puts them fairly high in the running for drunkest frat guys nationally), using 13 year old technology, can nail a “You aren’t going to believe how fucking fat this ______ is!” story to the wall AND paint it…..then why can’t you?  You make me sick.

Male homo sapien. Warrior poet. I live in Chicago with one wife, one offspring, and Scout the dog. I enjoy various stuff. Besides skinny skiing and going to bullfights on acid, I also enjoy running, reading, drinking, eating and procrastinating on many things, such as starting this blog. I have a mom, a dad, and a younger brother who recently produced a sister-in-law. I'm the only person in my family, sister-in-law included, who doesn't have a post-graduate degree. I guess that makes me special. I grew up in a small to medium sized town in the middle of Ohio. In fact the even smaller town next door has a sign which reads "The Geographic Center of Ohio". Given this is what they choose to boast you can only imagine how exciting that town is. My town is infinitely cooler. For example on weekend nights people from my town and the surrounding villages and hamlets converge on the public square to "cruise" in their souped-up mini trucks, some bearing Confederate flags, despite growing up and living rather safely north of the Mason-Dixon line. This is high-minded stuff we're talking about here. I graduated sometime during the Clinton presidency from the local high school where I played football and participated in absolutely nothing else. This strategy paid huge dividends when I applied to numerous colleges on the eastern seaboard which were highly selective. When you show up to the admissions table with "HIgh School Football and Nothing Else" on your application, you get respect. After graduating from Ohio University with a degree in Economics that I've used for absolutely nothing, I moved to Boston. Boston is a lovely city. I was doing things I'm not proud of for beer money and I left after 16 months. My next move was to Chicago and 10+ years later there I still reside. I write this blog for therapeutic reasons. Much like some people paint to relax or smoke crack to unwind after a stressful day, I record my thoughts on Al Gore's World Wide Web for 9 friends, 4 family members, 1 person who accidentally clicked through after an unsuccessful Google search for something else, and a guy named Patriot1 who lives in a silver Air Stream in the Nevada desert and broadcasts his own radio show. Is there a point to all of this? I doubt it. Years ago and in a galaxy far, far away (College Park, Maryland, then Athens, Ohio) I was toying with the idea of being a journalism major. I enjoyed writing so it seemed the obvious fit. Then I attended career day and learned that journalism majors could look forward to a salary of $EA,TSH.IT per year with the promise of a fatal heart attack at 47 years of age. I'm not falling for that trick, I told them (them being no one, and told being saying it in my own mind in the shower). Approximately 15 years later here I sit declared the big winner in that battle: I never made any money doing anything else and now I'm writing entirely for free. So suck balls, journalism career day. The views expressed in this website are mine and mine entirely. I don't wish to be an even bigger black eye to my family than I probably already am. As a result of this I will never be able to run for public office and I accept that reality. But this website is a very dignified, well-dressed skeleton full of witty retorts and honorable deeds compared to the disheveled, stenching, staggering and loud skeletons who would come marching out of the closet to White Zombie's "Thunderkiss '65" if they ever unearthed the college years. So enjoy your train ride, your hangover day at work, your AA meeting or your dump. I'm here to serve.
View all posts by Zach →
This entry was posted in Uncategorized and tagged chicago, obesity. Bookmark the permalink.