Better Lock Your Doors and Load Your Guns 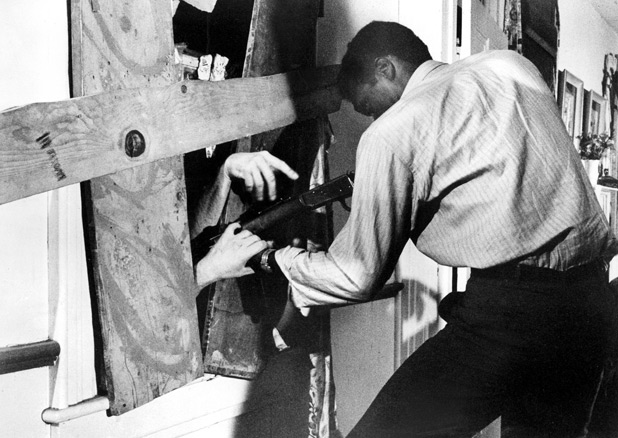 Because Zombie Christ is about to hit the streets, and he wants brains. Risen and hungry. All the zombie movies, all the zombie TV shows, all the zombie genre fans, all of them, need to remember who the OZ is: Jesus H. Christ. Without him there ain’t no Night of the Living Dead, no The Walking Dead, no 28 Days, none of that shit. So all the zombie lovers out there need to bow down and kiss the OZ’s ring.

I recently began Game of Thrones. All the ladies out there better belt up your trousers tight and get The Vapors ready for this admission: I freaking love the Feudal Fantasy genre. Can’t get enough. My hard partying lifestyle (up at 4:45am most mornings, work out, work, home, in bed by 9:30pm every night) cannot take on the HBO series right now, so I’m taking in Game of Thrones via book form. Not e-reader either. Print. A pile of bound paper with ink on it. Do I make you horny baby? With Good Friday here and me giddily immersed in a tale of kings and knights and goblins and omens, I cannot help but think the story of Christ could meld seamlessly into Game of Thrones. No one would even bat an eyelash. Consider it:

In an ancient time under an ancient moon, a teenage girl is impregnated by the God of Gods. But not by the God himself. He sent a ghost as his proxy. So the teenie bopper is knocked up by the lead God via ghost. I bet that was hot sex! Nope, there was no sex. I’m unsure if it was some sort of vapors to the cooch or what, but there was no intercourse. So the youngster carries the baby and delivers….and here is where it gets good….a blonde haired, blue-eyed babe, despite the fact she is from the Middle East and the baby should look like Yasser Arafat or UBL from a genetic standpoint. Instead she gives birth to some sort of Aryan Superman who is basically the prototype for Hitler Youth. So ominous and mysterious! Some low-level under-king wants him dead so he has to go chill in a cave for a minute. Grows a beard, does some stuff (

) in the cave, absolutely blows up the scene about 30 years later. With an interesting plot twist. His dad is a straight-up nasty mofo. Flooding planets because the partying has gotten out of hand, raining fire and brimstone on fuckers, I mean just consider Abraham. Dude was going to kill his son to impress God. What??? Abraham is about to carve his son up and God steps in at the last second and is like, “PSYCHE BITCH!!! You’re in the club already! Holy shit man, you were gonna actually stab your kid to death! You are a hardcore mutherfucker. What if I had come down with explosive diarrhea and didn’t stop you in time? Your kid would have bled out on this rock dude. BAHAHAHAHA! Man, I can’t wait to tell your kid someday that you were going to murder him just to be in our gang, he’ll be so pissed bro!” That is one demented dude. Despite this, Jesus is all about love and peace and tolerance. Except that he hates queers, undocumented immigrants, Muslims, and also Liberals. We’re still trying to locate the exact passages where he says he hates those groups, but we know they’re in the Bible somewhere, and when we find them, whoa boy, you’re all gonna be sorry. Some dick executes Jesus and we’re all sad and shit, but then guess what? Zombie Christ rises!!! The Game of Thrones author is not creative enough to make this particular story up. It is pure gold. We’ve got Zombie Christ walking around haunting some people, comforting others, getting brains where he can, all the while his posse has been driven underground where they are writing his story. Actually no one started to write the story until at the earliest 30 years later, but I’m sure they remembered everything perfectly and got every detail straighter than a priest’s dick.

Board up those windows tight, reinforce your doors, load the guns, and guard your brains. The Zombie Christ is risen.